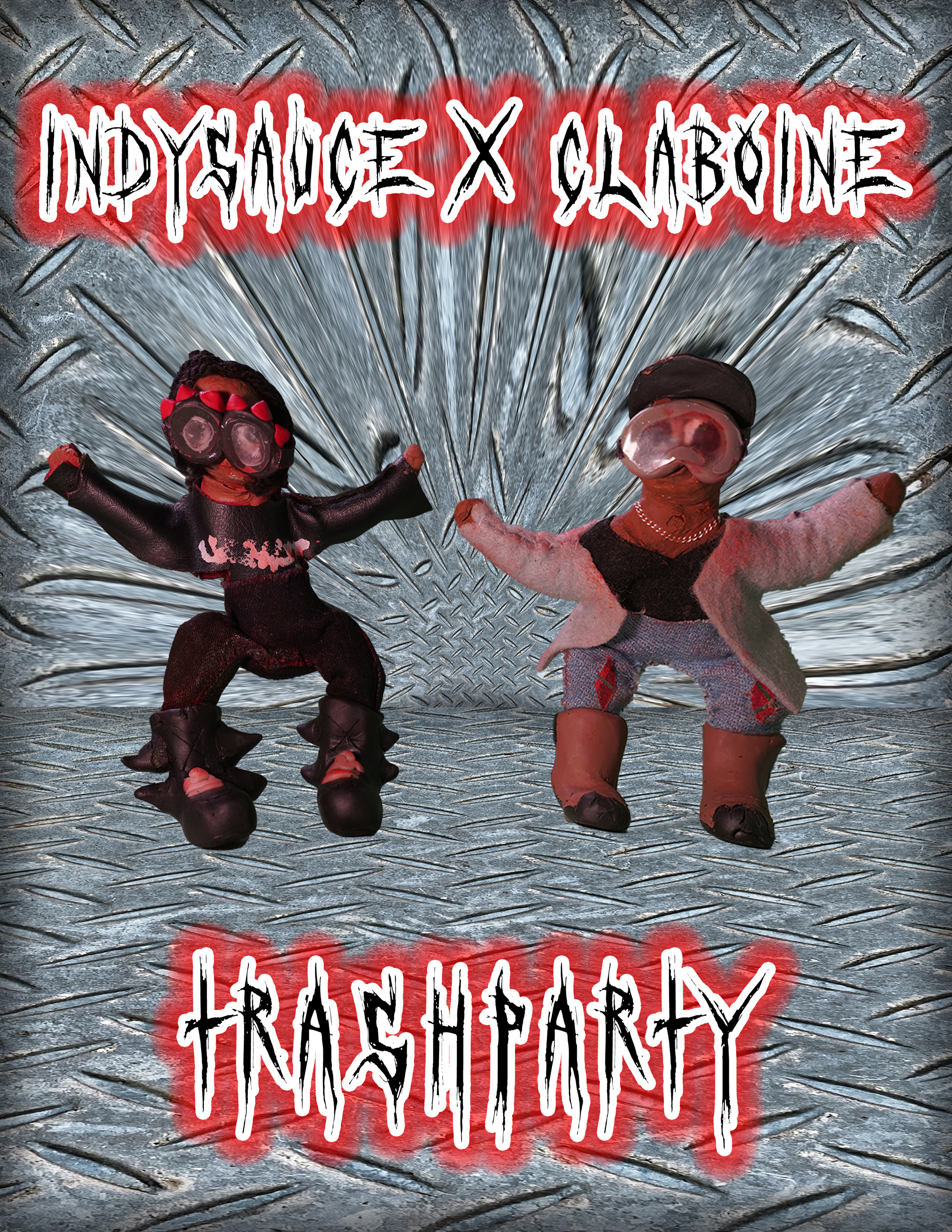 TRA$HPARTY is a hard-hitting, thrashy Hip hop song from Winston-Salem artists Indysauce and the late CLABOINE (LLC). The track features a distorted melody as well as banging drums, with raw, aggressive verses from Indysauce, and an untamed chorus from CLABOINE. The visualizer is claymation featuring the artists wearing outfits inspired by previous ones that they have worn before, such as in the "WokTalk" music video, featuring both of them, which was made by Rocket Reels and is playing on the TV in the living room scene. This visualizer features trippy visuals of the artists thrashing and rocking out in a kitchen, alleyway, and garage. As well as Indysauce going crazy in the bathroom, and the two of them fighting zombies in the backyard. It also features a flaming turd rapping in a toilet, worms crawling around in the kitchen, and Indysauce shooting a rocket launcher into the house and setting it on fire. Finally, it features the artists giving Patric Harry-O's, before running away from Paul Ice. Patric and Paul Ice are the main characters from the Nosebag Media game Patric's Pursuit, which is playable on the website and coming to mobile soon. Finally, the video is a tribute to the late CLABOINE. The video was released on what would have been his 21st birthday (July 30th, 2022). This one was an absolutely mental process to make. It was so fun, expensive, and time-consuming. It was truly a wonderful experience to make, and I am very thankful to my friends and family that helped out. I think it took me about 4 months to make, as I had to buy all of the stuff to make it, create the figures (for the first time, I made everything about them, and made little accessories and shoes out of oven-bake clay), design the sets, animate, do the practical effects stuff (worms and fire), and then edit. I actually lit the living room on fire, and that was a very fun and interesting process. I also went live on Instagram and worked on this one quite a bit, which was fun, as I had not done that very much for a while. I am thankful to those that joined and became part of the process as well. Anywho, I am very thankful to have had this opportunity to pay tribute to a fallen friend and create something that I am proud of and excited for you all to see, and hopefully enjoy the video.